A study recently released by Imperial College London has been heavily reported in the media; the authors estimate that in the absence of mitigation, COVID-19 could claim the lives of 510,000 people in Great Britain and 2.2 million people in the United States by the end of August.1 A collaborative study overseen by Columbia University that incorporated very different assumptions was coincidentally released the same day (March 16th).2 The two studies offer a valuable opportunity to learn about the limitations of mathematical models of novel phenomena, namely, accounting for historically unprecedented mitigation efforts currently underway around the world to combat a novel virus never before seen in humans, where the total number of infections (and thus the true overall fatality rate) is unknown. Disparate assumptions draw from premature, incomplete, and uncertain data.

Compare this with the Columbia study: “This estimate reveals a very high rate of undocumented infections: 86%. This finding is independently corroborated by the infection rate among foreign nationals evacuated from Wuhan (see supplementary materials). These undocumented infections are estimated to have been half as contagious per individual as reported infections (μ = 0.55; 95% CI: 0.46–0.62).”

There are few striking details here. For one, South Korea has a CFR that is one fourth that of the UK despite the fact that it has more than three times as many confirmed cases. Germany’s CFR is one twentieth that of the UK, with nearly five times as many confirmed cases. While the three countries with the highest number of confirmed cases also have the highest CFRs, looking through the other countries, it would seem impossible to accurately predict how one country’s CFR will compare to another’s based on any data we currently have. Despite this high variability, uncertainty, and complexity, the Imperial College London paper chose to rely on “a subset of cases from China.”

“The age-stratified proportion of infections that require hospitalisation and the infection fatality ratio (IFR) were obtained from an analysis of a subset of cases from China. These estimates were corrected for non-uniform attack rates by age and when applied to the GB population result in an IFR of 0.9% with 4.4% of infections hospitalised.”

Where did the authors get this subset? They cite a non-peer-reviewed preprint on medrxiv4 by the same lead author (Neil Ferguson)…and it’s worth noting that this study estimated an overall IFR for China that’s lower than the Imperial study’s estimate for Great Britain:
“We obtain an overall IFR estimate for China of 0.66% (0.39%,1.33%), again with an increasing profile with age.”

Furthermore, the Imperial study forecasts that COVID-19 illnesses in Great Britain and the US will either peak in June if no action is taken, or from the end of June through the middle of July in the best case mitigation scenario. 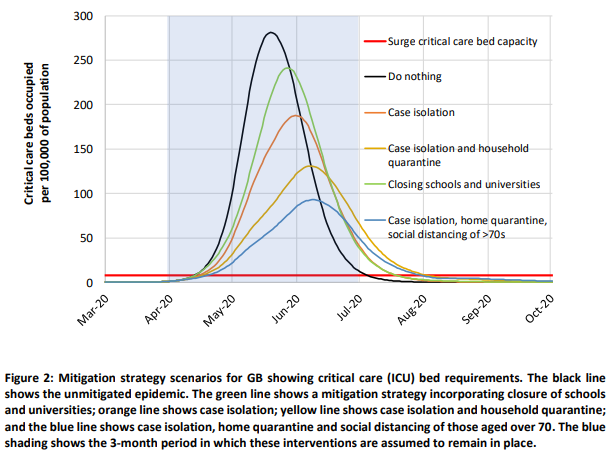 This sparks the question of whether or not SARS-CoV-2 transmission will be affected by the transition to summer. Despite apparent skepticism from public health officials, as far as I know, all endemic human coronaviruses are seasonal, with transmission rates reliably declining during the summer in temperate climates (like in the US and UK). Another fact strenuously downplayed by some experts is that the original SARS coronavirus epidemic in 2003 ended just as summer was beginning. While the end of the SARS epidemic was undoubtedly facilitated by successful containment efforts and features of the infection that made it easier to contain than SARS-CoV-2 or influenza, the timing is noteworthy. The first day of summer in the northern hemisphere in 2003 was June 21st.

It should go without saying that influenza virus transmission is seasonal. Note the regular seasonal variation in pneumonia and flu mortality in the figure below. Also note that both the 2016-17 and 2017-18 flu seasons saw flu-associated deaths at epidemic levels. CDC estimates that approximately 61,000 people died in the US alone due to influenza in the 2017-18 flu season, including over 600 deaths among those below the age of 17.5 Despite the magnitude of the impact of influenza in the 2017-18 season, I don’t recall much if any coverage at all in the mainstream media (and certainly not in prime time cable news).

The expected seasonality of COVID-19 transmission is further corroborated by a recently published analysis available on SSRN.6

To the best of my knowledge, there is no case in recent history (and possibly all of history) where the number of illnesses and deaths due to a viral pandemic peaked in July in a temperate climate; not with SARS, not with any other coronavirus, not with influenza, not with any viral pandemic that I know of. If I’m wrong, please feel free to contact me and let me know.

The bottom line is that a model is only as good as its assumptions, and those assumptions are only as good as the data. The discrepancies shown here reveal that the data regarding COVID-19 are premature, incomplete, and uncertain.

3 Replies to “COVID-19: Mathematical models in the face of uncertainty”